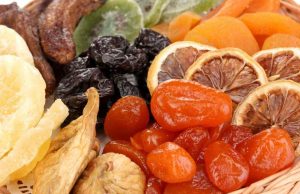 If you have a heavy menstrual period, it is better to pay more attention to your nutrition during this period. Eating certain foods can help reduce period symptoms. About 90% of women during their periods usually experience the following symptoms:

Foods that are recommended to include in your diet during menstruation include:

While fruits and vegetables are rich in nutrients and fiber, it is important to consume them during menstruation. People who consume more fruits like dates fruit and vegetables during this period have less physical pain and have an easier menstrual period.

Menstruation causes loss of blood and eventually iron in the body. People who have anemia usually go through heavy periods. Therefore, they should consume foods rich in iron so that they can compensate for the blood lost during menstruation. To supply your body with iron, it is better to consume the following foods during your period.

Drinking water can also help reduce period symptoms during this time. So it is better to drink more water during this time. You can even add some cinnamon or a few drops of lemon to the water to make it enjoyable to drink. 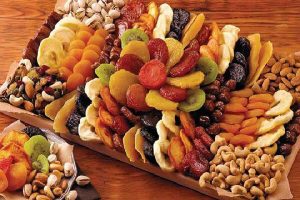 The truth is, there are no rules for how bad you feel during your period. Some women experience this period without any symptoms, but some of them struggle with all kinds of pains, severe nausea and many other symptoms. You can reduce these painful symptoms by eating properly during menstruation. The foods you eat during menstruation have a great effect on reducing back pain and make you feel less bloated and swollen and help you during this period as well, your life as during menstruation.

What to do to relieve premenstrual symptoms?

Some studies show that choosing certain foods may aggravate period symptoms. The American Chamber of Women’s Health (OWH) stated in a report that about 90% of people have experienced menstrual symptoms.

The following foods may reduce the symptoms of period pain:

All kinds of fruits and vegetables

This food group, while rich in nutrients and fiber and included in everyone’s diet, may have positive effects in reducing pain symptoms and other things as nutrition during menstruation and period.

Dates fruits provide the body with vitamins A, B, C, E along with minerals like iron. So Consuming dates regularly will be relieving.

In studies conducted in 2018 with the participation of university students in Spain, they announced that a vegetarian diet, as well as consuming more fruits and vegetables, caused less cramps and reduced menstrual pain.

Note: Although this result was reported on the reduction and improvement of menstrual symptoms, detailed studies on the reduction of these effects in people with uterine problems including endometriosis have not been done yet.

Simple and always available! The best nutrition during menstruation is drinking enough water, which greatly contributes to physical health and reducing menstrual symptoms. The most important effect of drinking water is reducing the possibility of headaches caused by dehydration.

The US Dietary Guidelines for 2015-2020 did not recommend daily water intake, while the British National Health Service (NHS) recommended 6-8 glasses a day.

Apart from the fact that fish is one of the healthiest foods, it helps a lot in reducing your pain. The rich omega-3 found in fish, generally known for its antioxidant and anti-inflammatory properties, will reduce your uterine pain and provide back pain relief. In addition to being rich in high-quality protein, fish is rich in vitamin B, which makes you get more energy from your food.

If you suffer from irregular bowel movements and diarrhea during menstruation, bananas will solve your problems and are one of the important pillars of nutrition during menstruation. Bananas are rich in magnesium, potassium, and fiber, which help with irregular bowel movements and will also have a positive effect on your relaxation. Magnesium also helps a lot in relieving muscle and back pain.

Chocolate is the best food available during menstruation.

In any case, do not use processed chocolates, because chocolates that use artificial sugar are not very beneficial for your health.

The natural sugar of fruits like watermelons, plums and figs easily compensates for the sugar you lost during menstruation. These fruits are also rich in vitamins that help with menstrual bloating. Because watermelon is made of a lot of water, it helps your body to retain water and also reduces bloating and abdominal pain.

Lemon helps reduce bloating and control your mood swings during menstruation. Lemons contain a lot of water and nutrients that are absorbed into your blood very quickly. If you feel weak, lethargic and nauseous during menstruation, a glass of sweet or sour lemon juice or a mix of herbs will help you a lot. But don’t drink too much juice because it causes stomach disorders.

Eggs are among the healthiest foods. Egg contains a certain amount of iron, fats soluble in vitamins, fatty acids and essential protein, which are necessary to consume during the menstrual cycle. Of course, do not boil the egg too much because it will cause stomach irritation and stomach pain. You should eat eggs every day to reduce menstrual symptoms, but don’t boil it too much because it will cause bloating.

Nearly 50% of women in the world suffer from anemia due to menstrual bleeding. The recommendation of most doctors is to take one iron pill daily during your menstrual cycle. Of course, if you have thalassemia, you should consult your doctor and follow a special diet for nutrition during menstruation.